In dollar gains, the Vancouver market has dropped from its April high of $701,000 down to $683,500.  As shown in the graph below, this still represents a year-over-year price increase, as Vancouver had been posting incredible price increases through the end of 2017 and into 2018.  However, the current benchmark price also shows a market cooling from a strong spring.  For Toronto, the condo market remains strong, posting another quarter over quarter gain, with benchmark prices now at $538,300. 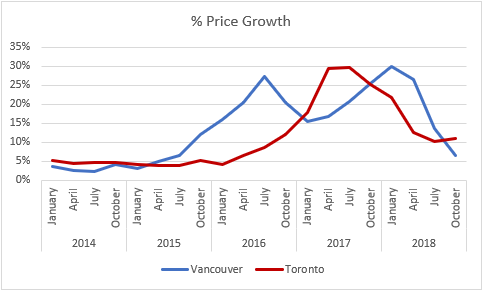 Turning to the year-over-year percentage gains, the graph shows Vancouver in a free fall, while Toronto has leveled off.  It is important to see that Vancouver condos remain in growth territory; however, that will change if prices do not start to rebound over the winter.  In comparison, Toronto is showing a steadily performing market with increases leveling above 10% over the past three quarters.  Toronto seems to be exiting its peak annual increases with prices that are sustaining their earlier growth.

As we have been doing for both the detached and condo markets, we continue to compare the two cities using a nine-month time shift graph (Vancouver’s numbers are from January 2014 to the present and Toronto’s are from October 2014 to present).

From the nine-month shift we see that both cities acted very similarly through their first price peak.  Since that time, each city is following a comparable trend, though on their own trajectories.  Vancouver began to slow its price increases only to surge once more to even higher year-over-year margins.  However, this surge appears to be all but over now as its prices are beginning to retreat.  On the other hand, Toronto continued its peak period through two quarters and seems to be showing signs of a steadier return to normal.  Annual gains are no longer near 30%, however, they have been consistently above 10% for much of 2018.

Unlike the detached market it is hard to make any assumptions for Toronto based on how Vancouver price changes have gone.  Since April 2017, Toronto has charted a course that has parallels to Vancouver’s but one that is not a mirror image.  That said, it is interesting to see Vancouver’s annual price increases in such a free fall.  If the Vancouver market were to go into the negatives it is unclear what, if any, impact that could have for Toronto down the road.

To date, our comparison series of posts have shown that both cities appear to behave with a degree of overlap, and so we feel safe saying it would not be good news for either city if the other was struggling.

View all posts by sixhousingsense